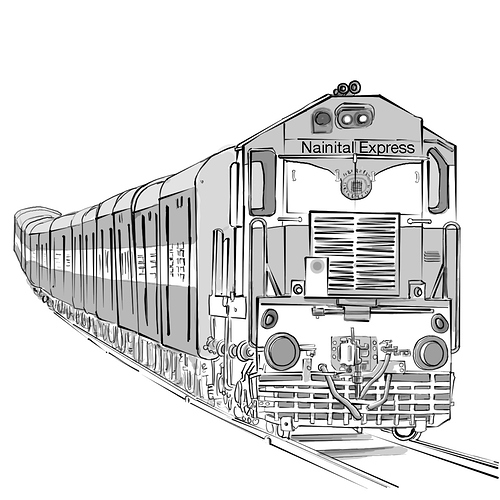 One of the great sights that IET offered repeatedly every 24 hours was the 9 O’clock or thereabouts, Nainital Express. Usually the time when we returned from our after dinner walk or cigarette stroll till Gupta’s/Lambu’s and while the pretty girls were hounded back inside the walls of Gargi for a safe night(!!),the Nainital Express would announce its imminent arrival from a distance. And some of us would wait at the crossing as indeed would some girls at their windows to see that beautiful sight. And suddenly it would be upon us – a musical on rails with little openings emanating light, reaching out in a weird enchanting dance on the sides of the rails almost in tandem with clickety clack of the rails. And then it would be gone. Taking some people to their homes some people to a nice little sojourn in the hills, some to their colleges and some to their work. But, we stood there, rooted, left in a strange mix of feelings.

There was a little homely bank across the tracks where all of us used to have our accounts. Our pay slips from home we would scurry to deposit here through a short cut in the fields from behind the faculty building across the tracks. This is where we stored our small money that would eventually buy us a ticket to a big life. And it did. After many years I have and I still wonder, if that bank with its smiling helpful people, is the same as we left it? Does it still roll out the same tokens? Do they still smile or has time and times put scowls on their faces? Does innocence still survive in Madiyon?

On the other side, from behind the mens hostel, led a small way towards Aliganj. In days of yore, seldom did vikram’s come to this little “T” which later on a became a crossing, mostly one walked down to sector Q. And from there vikram would take us to mayfair. To my 7th screening of “Dil hai ki manta Nahin”. Bhala kyon mane dil? Jab Amir ka nahin mana to main kya cheez hoon? Usually it was the night show and for my nice friend Gulati it was a late chicken dinner that would end around 12 midnight. At 12 or roundabout, Ganj was a delightful sight. Wide expansive smooth roads, almost no traffic. Sodium lit. One could walk
here forever but i never had the right person to hold my hand. I had to manage with Sunil Pathak – our inhouse Rambo, which tells you why I had an arm ache soon after. when, for returning, one would finally board another vikram, it was time to be pleasantly surprised: familiar faces would be already seated there, some returning from Novelty and some from Sahu. And from sector Q we we would again walk back to our college with the night wind in our hair.

I want to go on. I can’t. Too long an exhibition of innocent nostalgia is clearly out of favour.