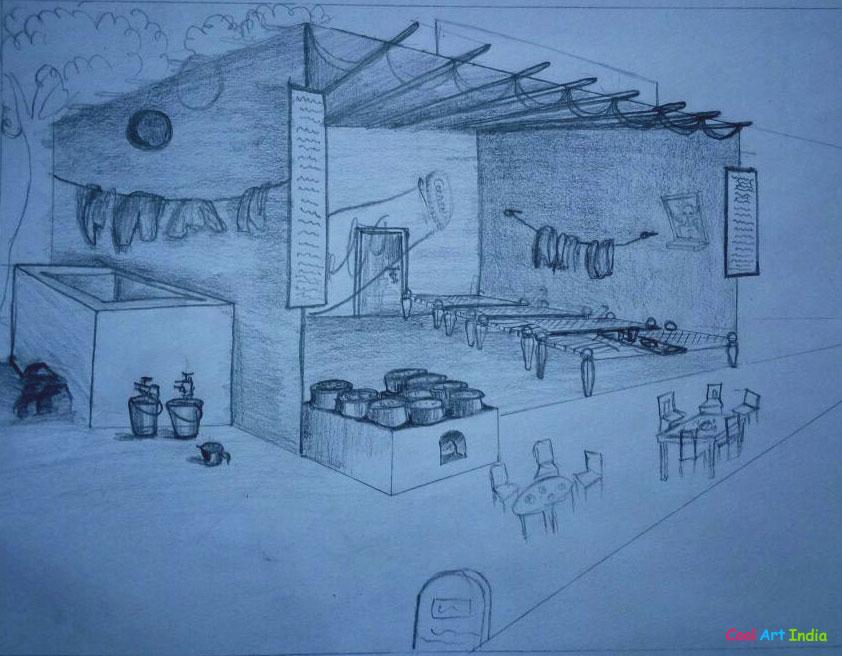 Image from coolartindia.com842×656 75 KB
The road that goes from Lucknow to Sitapur, passing lamboos dhaba in madiyaon, actually does not go anywhere. It stays put, much like lambu and his dhaba. When I think of lambu, I am, strangely reminded of royalty. This cannot be caused by any mysterious wealth that lambu stashed away in his liquor store. This is because I am yet to see a person as royal and regal as lambu. If I take that road to Sitapur again I shall salute that dhaba and I will tell myself – I have walked this road before. In the blazing sun of a summer afternoon and in times when the midnight- summer wind would caress my hair.

I have walked this road before. There are other roads that I have walked. Like the one leading to Gargi and also away from it. I have sat on the divider and seen the moon climb up. Some of us have also seen go down. Many of us have held hands on this road. Some of us for the last time and some of us – forever. This road has seen a lot. And it is yet to see. Because it will stay there and countless pilgrims shall trudge by.

I have walked this road before. It overlooks the cricket/football field where once DJ bowled, and Parmar batted and the girls yelled. The yelling got DJ a fractured leg and Parmar a six. It was told that Roop was to blame. We are all wanderers, gypsies who camp from one place to another. Gypsies. So let it be told. So let be written.

I have climbed these stairs before. That lead to the common room of D bock. This is where Sanjiv Sharma made many pump iron. And Suvrat Nautiyal would smile indulgently. If Suvrat was the handsomest of them all then Priyanka Hangal was the prettiest of them all. You don’t agree? Ask Anand Prakash – the official snapper of encore in which she dazzled us all on the ramp. When the snaps were exhibited it seemed we were having an exclusive Hang – all display. Would you blame the snapper?

I have climbed these stairs too. They lead to the roof and I go there because the lights have gone out again. Because GN Pandey couldn’t get us off the rural grid. So there I am. Looking at Gargi on a moonless night. From there, someone is flashing a light. Blips and dashes I imagine. A love letter in morse – I hope. And then PK Rai’s yezdi growls to life and speeds towards lamboos. In its headlight I see a multitude walking in congregation towards the same destination.

I have heard that rumble before. Milling thunderclouds unleashing a storm. Bolts and thunder and torrents of unending rains. The noise of crickets and the croaks of frogs. The gentle dhub dhub of mukerjees enfield. KK being applauded on his yet another win in debate. Or Praveer. Karki is busy mcing with Nitin Gupta and Dimri which is less noisy because nitin is sleepy.

I have heard this trying- to- make-music noise before. Must be Shashank Rastogi on his guitar. I wonder if the trying has ended. Because I seldom see such passion.

I have smelt that odour before. Its Bagchi and his famous pipe. The sweet smell of undried burning tobacco. Mithunda never smoked pipes but Bagchi loved pipes and Mithun too. After disco dancer there was no one who danced better than him. Bagchi sang too and sang well. And then unfortunately for all us Agnipath came and mithunda had another performance to his credit after Mrigya. And we kept our distance from Bagchida.

I have seen this sight before. Jambwant swaying as he walked in the corridor. Shivam practicing his follow- through as he walked past the workshop. Paliwal sending a powerful smash down the line and making another point.mechanically. men walking away from Gargi when night call had been taken and the gates would close.

Then night grew and the night creatures would emerge for their last destination. Lamboos. Some a bit high and some plain hungry. Sapeda, lamboos diligent cook, would throw in the spices and make the daal dance. One by one people would come and go. Chakru for his cigarrette Sameer on his hero puch, Ajay Garg for a leak atop a resting truck. I have seen this night before.

I want to walk these roads again, smell those smells again. watch the rain beating down on my window sill. i want to go to aminabad to buy curtains for my little window. to get those kebabs, those books.

I want to step on the same path again. Because roads don’t go anywhere. It is only we who go and it is only us who can return.