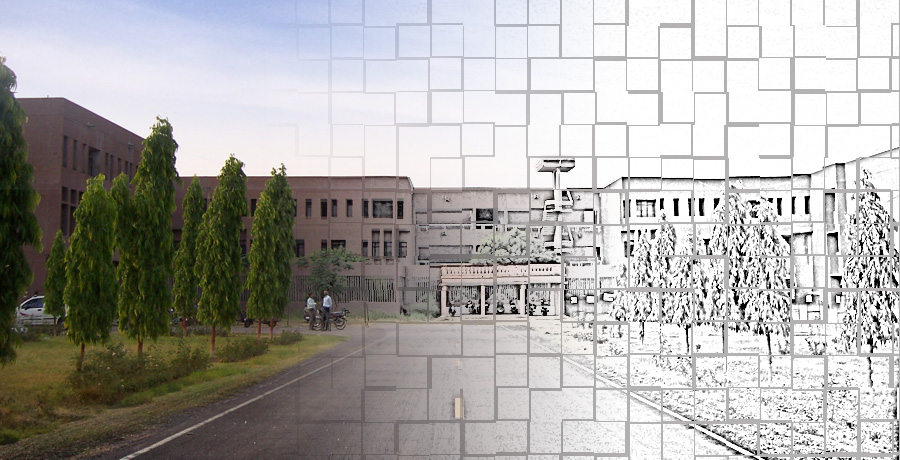 Let the Muzik play, as Shamur would say or would the Finnish OEM vendor. For, nostalgia is never out of favour. Even if it gives goose bumps and a throatful of lumps.

Even if the accessible romance of a level crossing on a Meter Gauge rail track has given way to concrete ambitions of a convoluted flyover. Trains still pass by the GBs (1 and 2). But there is no IETian crossing the tracks when Nainital express or even Sitapur Local goes chugging along, what it still does with a precise routine, who can notice the few peeping eyes enjoying the passing trail of lit squares. For, the passage at the corner is closed. So is the passage to the Vijaya Bank through the village by the Cold Storage Plant. The branch where the current account of Encore93 was kept. Many new blocks have come up in the campus including the administrative building for the UPTU, the auditorium, Post Office and bank, the New GB.

The Band Samosa of Guptaji’s dhaba are no more now. As is the Dhaba. The over-bridge has routed away this settlement by a Neem-grove. The serenity of this corner has since been buried under the noise of hot rubber tracting on cold tar. The Mishraji ki Dukan is still there-supposedly the hygienic-est of 'em all by large.

The city has arrived to the ‘Engineering College’ and gone beyond towards Sitapur. The pond behind the playground on the way to the village (that was) Madiyaon has been reclaimed and has been inhabited by the urban man. The landfill pond by the road to Sector-Q has been reclaimed as well and monstrous structures in this place have been sliding up the sky-scape since the summer of 95.

This has brought about shrinkage in the catchment area of the IETiens. The exit in the wall behind D Block and A Block have since been closed. The height of wall makes IET a little fortress.

Now no Policemen can extort food from the C-Block mess on special day (Wednesdays) and get the chase and subsequently beating of their lives. Later Saraswat would be in his full character shielding the freehitters from police. I do not know whereabouts of the mess manager of C-Block. He was ever so polite and provided fingerlicking yummy food. The Bread Rolls out of his kitchen were the tastiest one would have ever had (No one has my wife’s number). The custard on Saturdays lunch menu, (well, now lump drowned in saliva, almost) forced local hostellers to stay back for it.

Then during exams Babulal and Ramkumar would call “Bhaiya Chai” at about 11pm. The tea was served in the mess to prepare for the overnighter. The huge ‘Bhagona’ would store the tastiest tea. Then there would be sounds from the D-Block top floor abode of SMT, Saket, SK-II. The Ghost of 11ft height had reappeared draped in white and knocked on Alok Dwivedi’s door.

The badminton court of the C-block was witness to some of the fiercest matches. HKP, TJ, SK et al used to be the stars. The sound of shuttlecock being powerfully, repeatedly, smashed by a tight net was music enough to entice the padhaku-est of them all out to the balcony. For other times there always was Rajiv Kanaujia with his Enigma graveyard shifts. So were the guitarists from the north east. Or one of the RDLA’s playing ‘Nothing Else Matters’ in full blast. Life was music.

The Ganj has been won back by the Nawab of somewhere near Sitapur. Mayfair had shut its screen down many summers ago. But now you have PVRs in Sahara Ganj. Innocence has been taken over by the media.