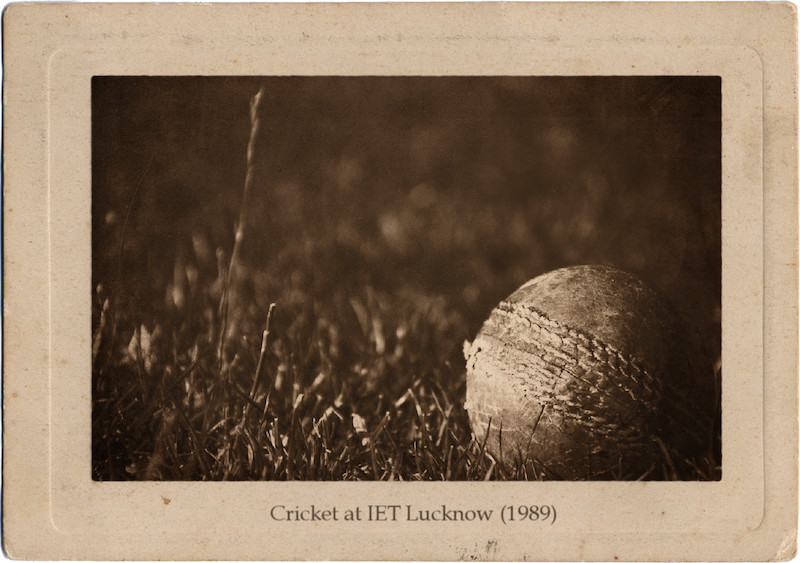 The word “SHORT” used for the match is bothering me. Let us keep it 40 overs a side ( Ha Ha!! we can settle it at 25 overs as it used to be in IET in the late 1980’s.) Would like some old stories told several times at Lambu’s Dhaba ??

One Mr Sanjaya Yadava(who very lovingly made the new cricket pitch overlooking the Gargi) could never get it … enough and always wanted to make it a two innings affair. I also wanted one two innings match but it I could never make it. Of course Sanjaya’s team did very well in that only two innings match.I hope old timers remember hat new matt which was purchased by Sri Shivam Khare for the 1988-89 local tournament, made that wicket real fast and bouncy. Even the spinners used to appear like Colin Croft on that wicket.

Thought immediately goes to 1989 Feb (just before Encore) when we went to IT BHU for the tournament and the match against REC Jabalpur was a nightmare. In the 35 over match the first three batters scored more than 225 in about 30 overs and after that the ball which we took from Lucknow turned into pulp.Bowling after that was real easy. We were given a target??of about 270 and then came the fastest one THE “CALAMULLA”. The bowl which REC Jabalpur had brought was of dark chocolate color - I remember very well- as the establishted openers wanted to provide stability at a later stage. The “CALAMULLA” bowling in Amphi Theatre ground was to seen to be believed.( Tiger point can further elaborate on that in his slick language ) That bowler was real quick and absurd in line and length. We were battered and shot down for 66 (and really some of the seniors wanted to return after that match. We fought in the hostel to stay for the remaining matches). I wish someday IET team can give same thrashing to REC Jabalpur. In my mind I have played that match again and again and that really hurts.

In the next match against REC Durgapur we managed 175/5 in 35 overs and lost the match in the last two overs when Chakru Sir wanted to polish off the tail. That was better and it feels better.In the last match against Roorkee we made 122 and they were 85/8 but we managed to lose. 4 losses in 4 matches 18 years ago in the first major cricket tournament IET participated. HAS IT BEEN AVENGED?? IF NOT, WHEN IT WILL BE ??? I want to be updated.

One last question : to AMITABH PARMAR sir. Why you were not there at IT BHU with the team?? ( He was the best batsman who loved to bowl fast in-cutters and used to imitate a Lankan bowler)
I remember hitting Parmar Sir on the box with a fast one and next two balls were hit with greatest force seen in IET ( Ist towards the Directors bungalow and next below the water tank). At least for me cricket meant Parmar Sir. Of course there was there opener Gupta : very wristy and flicking the balls on legs and bothering us but Parmar Sir was a different class.

I also recollect one match in which my two favourite juniors Sanjaya Yadav and Ajay Garg were acting umpires.[Both very good and capable cricketers. Of course Garg was a very good line and length bowler except for the times when he wanted to spit fire -“AAG UGALNA” in his own words. And Sanjay a very good cricketing brain who loved thin handled bats (a point of conflict) and was capable of lifting the ball over the bowlers head for boundaries. We had a good partnership once.]I had full faith in there umpiring capabilities but… In that match I kept on hitting the openers on the pads regularly and was not getting favours . TWO BALLS … (I felt that even Shakoor Rana would have given Javed Miandad out against India at Lahore on a similar delivery) in a single over and in a brief spell of madness I kicked the stumps on the bowling end and it landed some where near Square leg umpire. I was thrown out of match and ground.

Anyway after all these years sometimes on Saturday nights when kids are asleep ,I feel that wind was strong and the ball was moving towards the leg… or was it too high??? Of course things once done cannot be undone but I want to say sorry to umpires and I really really mean it. I agree with the view that both of them held one should always give the benifit of doubt to the batsman.